The Exponential Function and Its Applications in Science

From pwiki
Jump to navigation Jump to search

The text books referred to in this module are:

Properties of the Exponential Function

Geometric Progression and the Exponential Function

Consider the pairs of values for x and y shown in the table. Note that each time x increases by 1, the value of y is increased by a factor of 2. Any such function in which the dependent variable increases by a constant factor is called a “geometric progression”. In this case, the function can be generated by the expression:

which is an exponential function with base 2.

If we take the natural log of both sides of this equation, we get:

If we then take the exponential of both sides, we find:

where the parameter λ = ln2

From this we can see that any geometric progression can be represented by an exponential function with base e.

Derivative of the Exponential Function

A key property (in fact, the defining property for the base e) of the exponential function is that it is it’s own derivative.

This leads to a very important result that has many applications in the sciences. Whenever a quantity is changing in such a way that the time rate of change is proportional to the quantity itself, the quantity can be represented by an exponential function of time. (Note that since the independent variable now represents time, the symbol x is replaced by t.) For example, suppose y is a quantity that has the property:

This is equivalent to:

is the proportionality constant.

Dividing by y and multiplying by dt, we get:

Integrating both sides of the equation gives:

Taking the exponential of each side of the equation gives:

Again taking the natural log of both sides we get:

Finally taking the exponential of both sides:


Now consider the case where the dependent variable decreases with time in proportion to its own value.

As seen in section 1.2, the solution to this “differential equation” is an exponential, but this time with a negative exponent.

This is called an exponential decay and

is known as the “decay constant:

Note that when the independent variable is time, the decay constant

must have the units of inverse time (e.g.

The equation for an exponential decay is often written using a different parameter called the “time constant” which is defined as:

has the same units as t .
Substituting for t, we can see that:


In other words, the decay follows a geometric progression where for each interval of time

, the value of y falls by a constant factor of 1/e. This holds true no matter when you set the time t = 0.


Finally consider what we get when we take the natural log of each side of the equation:

Comparing this to the generic equation for a straight line, y = b + m x, (note that the variable y in this equation is different than the y in all other equations) we see that a graph of ln y vs t will yield a straight line with slope

). This is a powerful experimental tool for demonstrating whether or not a certain measured quantity follows an exponential decay.

There are many physical processes that follow an exponential function. As discussed in section 1, this occurs whenever the rate of change of some quantity is proportional to the quantity itself.


The atomic nucleus is made up of neutrons and protons. Only nuclei with certain ratios of the number of neutrons to the number of protons (called isotopes) are stable, all others will change spontaneously into another combination by giving off a quantum of radiation. These radiations were called alpha, beta and gamma rays by the early researchers. We now know that the alpha ray is a helium nucleus, the beta ray is an electron or positron and the gamma ray is a high energy photon. Because this process is governed by quantum mechanics, it happens at random. In a sample of radioactive nuclei, there is no way to know which individual nucleus will decay next or when the next decay will occur. All that is known is that there is a certain probability that a given nucleus will decay within a certain period of time. The probability of decay per unit time is

and the probability in a period of time

t. Since the probability is exactly the same for all nuclei of the same species, then the number of nuclei that will decay during the next unit of time is N

To get the instantaneous rate of decay, we let

approach 0 in the usual way and get:

is the probability of decay in one second, then it has units of


In a real experiment, one usually measures the number of particles or “rays” emitted by the sample per unit time. Assuming that each particle emitted represents the decay of one nucleus, this is the same as the number of nuclei that decay per second and is known as the decay rate R. It is given by:
R = λ N


Since the decay process is random, this equation only gives the most likely or average value of the decay rate at a given moment. Actual measurements of the number of particles emitted will vary statistically with a “Normal” distribution that has a standard deviation or uncertainty of σ = ±

is the number of decays in a time interval

. As discussed in section 1.3, since the rate of change of the number of nuclei is proportional to the number itself,

then both the number of nuclei in the sample and the decay rate follow an exponential decay function:

We have seen in section 1.3 (Exponential Decay) that an exponential decay can be characterized by the time constant,

, which is equal the inverse of the probability of decay,

, and represents the time for the number of nuclei to decrease by a factor of 1/e of its initial value to

. (e is the base of the natural logarithm.) In the first time interval

. In the next time interval

, N falls a further factor of 1/e to a value of

. In the second half-life, it falls to 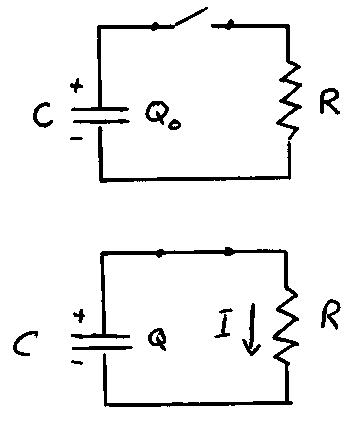 Another physical situation where the rate of change of a quantity is proportional to the quantity itself occurs in electric circuits when a capacitor discharges through a resistor. Consider the circuit shown. Suppose that the capacitor C carries a charge on each of its plates of + or -

From conservation of charge, the rate at which charge flows from the capacitor is equal to the current flowing through the resistor. Since this serves to reduce the amount of charge on the capacitor, the rate of change is negative:

Combining this with the equation above, we have:

In other words, the rate of change of Q is proportional to Q with a proportionality constant of - 1/RC. The solution of this differential equation is:

is the time constant.

In Physics NYC (Waves and Modern Physics), you studied the simple harmonic motion of a mass on a spring and the simple pendulum. The motion of all such systems is described by the equation: x = A cosω t where A is the amplitude of the motion and its period is:

is called the angular frequency and is measured in rad/s. For simplicity we will assume that x = A at t = 0 (ie. the phase angle


You also know that if a frictional force is added to the system, the amplitude of the oscillations decays exponentially. The motion of the system is said to be “damped” and is described by: 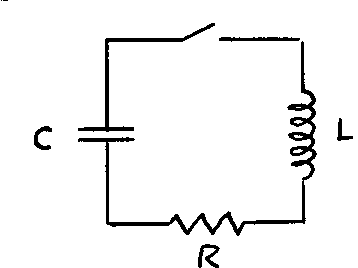 where m is the mass and

is a measure of the amount of friction. The angular frequency,

’ is slightly different from the undamped frequency

. Remarkably, the electrical circuit shown also exhibits damped harmonic motion. If the capacitor is given an initial charge Q_0 , the charge Q is described by the equation:

Applications in Chemistry and Biology


In a chemical reaction, the reaction is said to be first order with respect to a certain reactant when the rate at which that reactant is used up is proportional to its concentration. Let the concentration of a reactant be [A], then the change of concentration,

over a time period

in a first order reaction will be:

where k is called the rate constant (equivalent to the symbol

in the previous section). The negative sign indicates that the concentration of the reactant decreases with time.


For an infinitesimally short period of time, the instantaneous rate of change is:

which we can solve to get:

Taking the natural logarithm of both sides of the equation, we get:

. This provides a good method of analysing data to verify whether or not it represents an exponential decay.


Let us consider the population of some species starting with just two individuals. Suppose these two individuals produce four offspring in their lifetime. Suppose that the next generation follows the same pattern and produces four offspring for each pair for a total of eight. These go on in their turn to produce sixteen offspring and so on. Each generation, the population increases by a factor of two. As discussed in section 1, this pattern represents an exponential growth. The rate of growth of the population is proportional to the present population:

where N is the number of individuals and r is called the intrinsic growth rate. As usual, the solution to this equation is:

In real situations, of course, no population can continue to grow exponentially for ever. For example, consider this quotation from the text Life, The Science of Biology, sixth edition by Purves et al.
“... a single pair of Atlantic cod and their descendants, reproducing at the maximum rate of which they are capable, would fill the Atlantic Ocean in 6 years.”


Obviously, life for the cod fish, as for every other species, is not so simple. In real life, population growth is limited by factors such as food sources, predators, space, etc. For a discussion of more realistic population growth patterns, see your biology text.